Yesterday I went to a yoga class again. The teacher led us also through more challenging asanas. When we were in urdhva dhanurasana we were asked to lift up the right leg, then the left leg, then the right arm, then the left arm. I was more than surprised that I could do this. This variation was lost. Now it’s back. This is so awesome.

It was not a piece of cake.

Lift the leg, I thought. There was no alternative to this message. And voilà.

I don’t want to give up my home practice anymore. Yet yesterday I also saw the advantages of yoga classes. I got introduced to variations of asanas that I’ve never practiced so far. To practice in a group is fun and it gives energy.

I bought a membership at the Sivananda yoga studio. It lasts one year. It shall complement my Ashtanga yoga practice at home.

I’ll write about my Sivananda classes more in the next posts.

I call this a plateau. On the surface nothing moves. Yet it requires discipline not to give up. One day it might seem like a miracle a difference can be seen. It might seem as if progress happened from one day to the next but this is not true. All the effort, sometimes over months/years is necessary. Perhaps I’m stronger again and the flexibility got weaker. Who knows……..

I keep wheeling. I love the community on Instagram. Worldwide are yoga practitioners who get into a wheel every Wednesday. This has power. This is amazing.

Today and during the next weeks I wanted to write about vinyasa. It’s my weakest part of primary Asthanga yoga series. I think it’s generally neglected. Ashtanga yoga wouldn’t be what it is without the vinyasa. It makes sense to give the transitions some attention.

Instead of an exercise that could help to master also the more difficult vinyasa I realized that most important is discipline.

There is the discipline to practice on a daily basis.

There is also the discipline to do the work that seems hard. Especially when it comes to vinyasa I see a lot of avoiding what is necessary if one wants to progress.

One must develop the discipline to lift up the body even when it’s hard. Perhaps even the discipline is necessary to add an additional practice with the focus vinyasa. Strength is needed, flexibility is needed and technique, no matter what vinyasa are asana we practice. I tend to avoid the strength exercises.

Decades ago no online tutorial were available. This has changed. Thousands of tips and exercises are available these days. But one must practice them.

Getting better at anything comes with discomfort and frustration. Not avoid this requires discipline. To stretch comes with discomfort. to get stronger implies burning muscles. To practice those parts that are difficult come with frustration because we’ll experience our shortcomings. But that’s the way how to improve. One must often go through a valley.

The message: Don’t avoid the difficult parts of the practice. Develop the discipline not to avoid the discomfort and frustration which comes with learning something new. 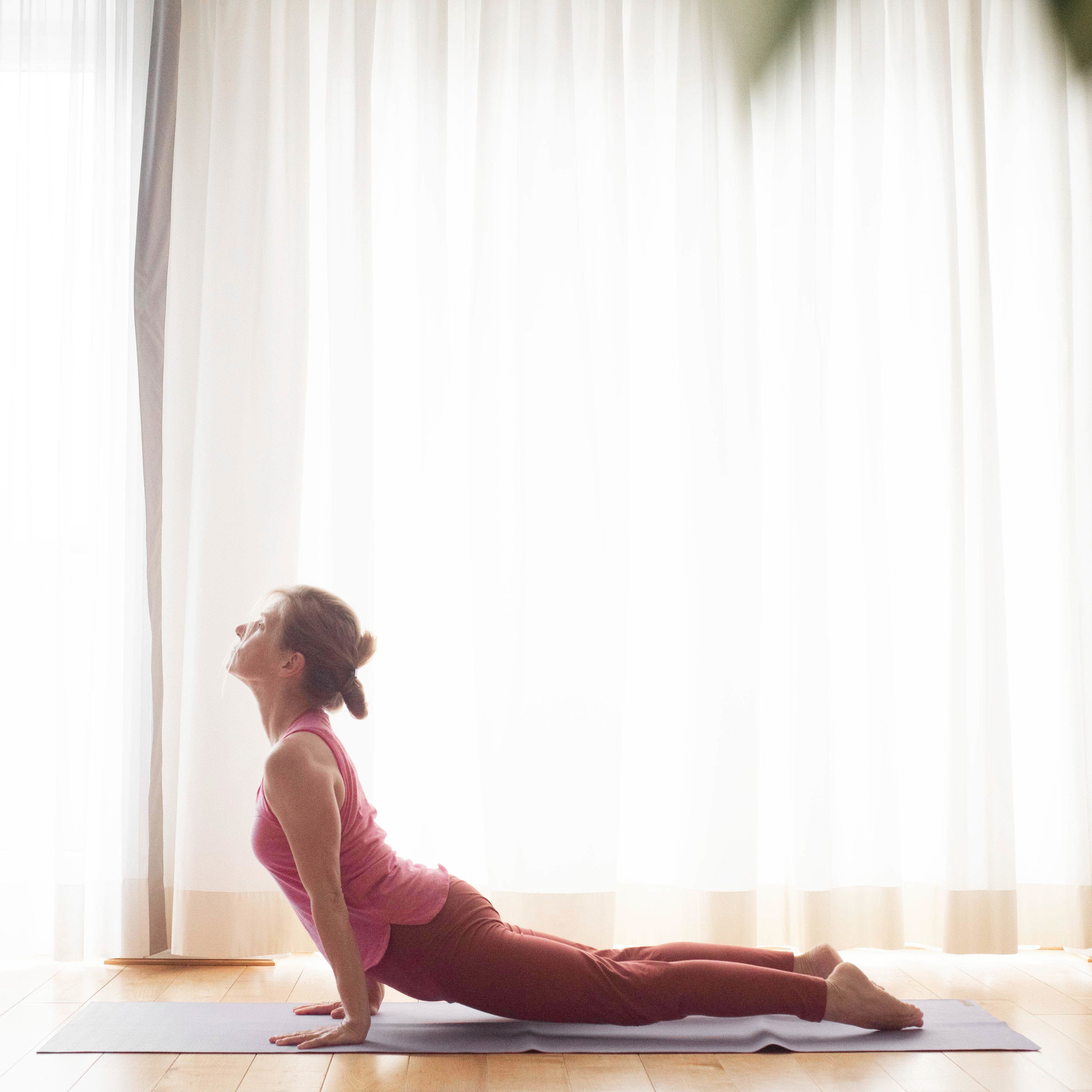 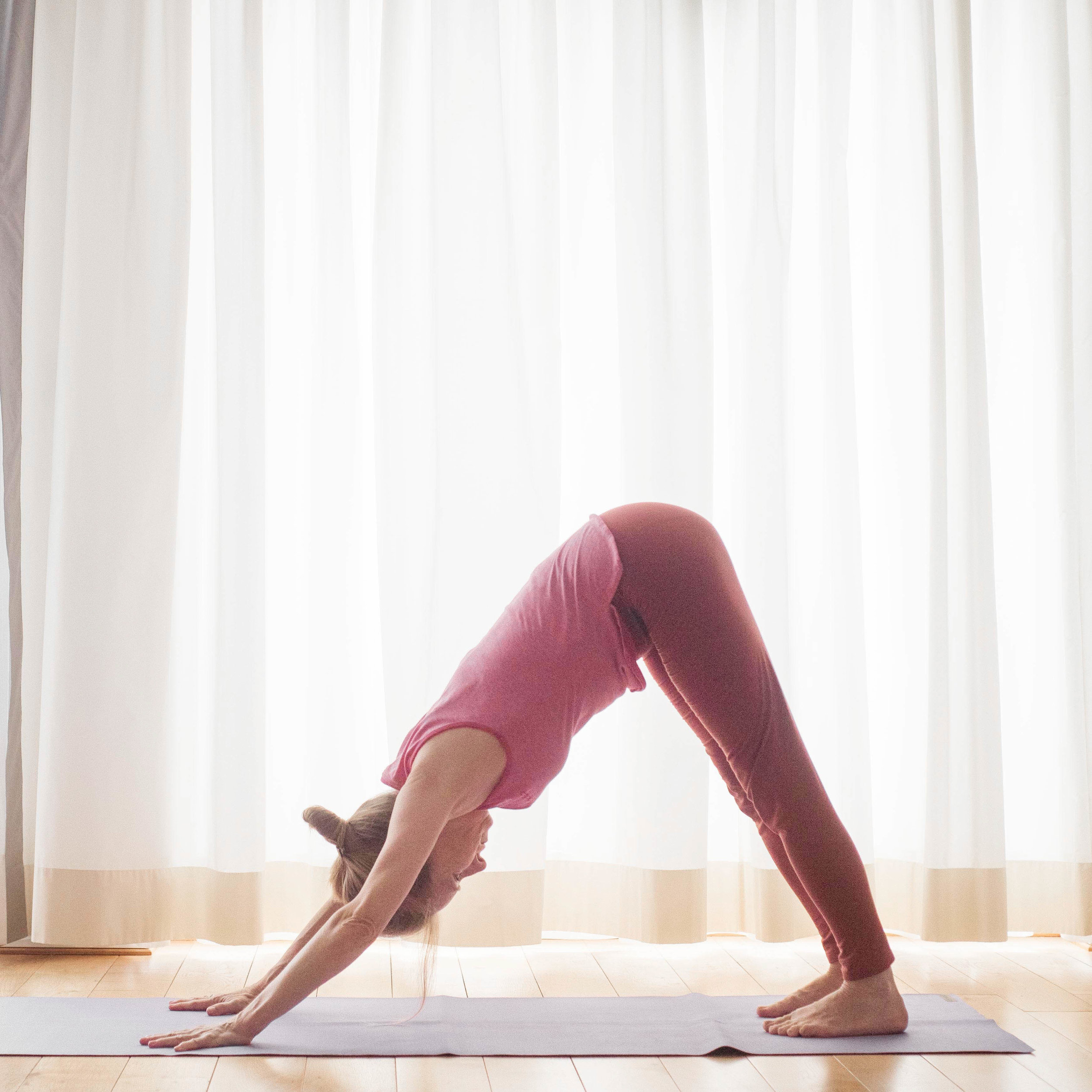 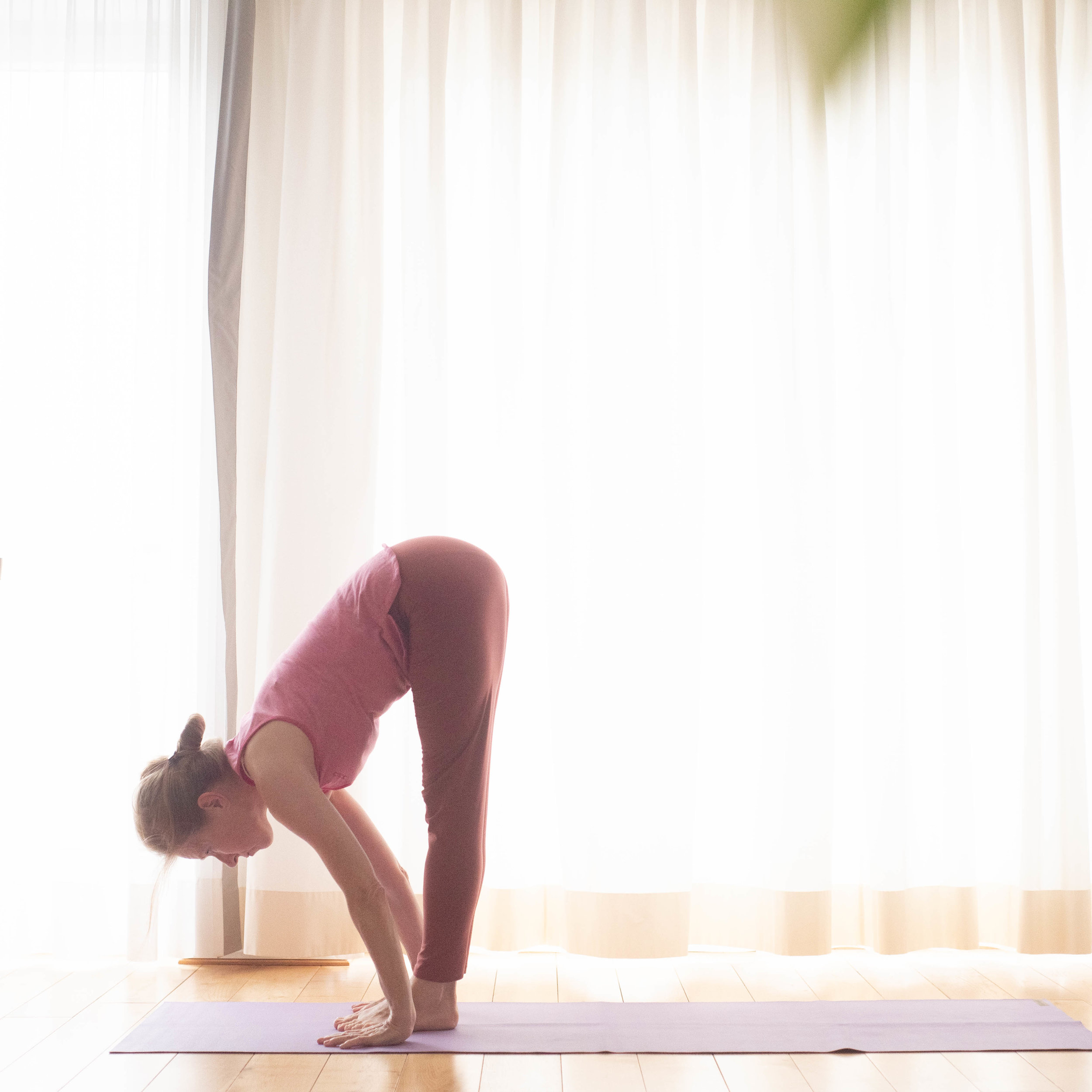 It can be confusing how this word is used. In fact it has two meanings:

Most of the time we mean transition, when we talk about vinyasa. Vinyasa is not only about jumping forward and backwar. Chakrasana is a vinyasa as well. There are many many other transitions, easy ones and demanding ones.

Important is to inhale fully and to exhale fully. Take your time.

It’s also important not to stop to early with the movement. This is a common mistake, but understandable. I think it’s better to take 2 extra breaths than to hurry to the next stage.

Breathing superficially and exercising all the vinyasa (stages) sloppily reduce the positive effects of this practice.

An example: After a deep forward bending asanas like supta kurmasana it can be difficult to get into urdhva mukha svanasana. To practice this stage sloppily means also that the effect is reduce. This back bend shall balance the body again. It can be useful to hold this stage a bit longer to allow the body to adjust to this position slowly.

In Ashtanga yoga we have the transitions and we have the asanas that is held for 5 breaths. it used to be 8 breaths, which would make more sense. I even recommend holding the difficult asanas up to one minute.

The word in bracket only describes what is done during the counting.

The first vinyasa (vinyasa) that is learned when practicing Ashtanga yoga is to get into an asana with one breath. This can be rather challenging. I’ll write more about this in my next blog post. 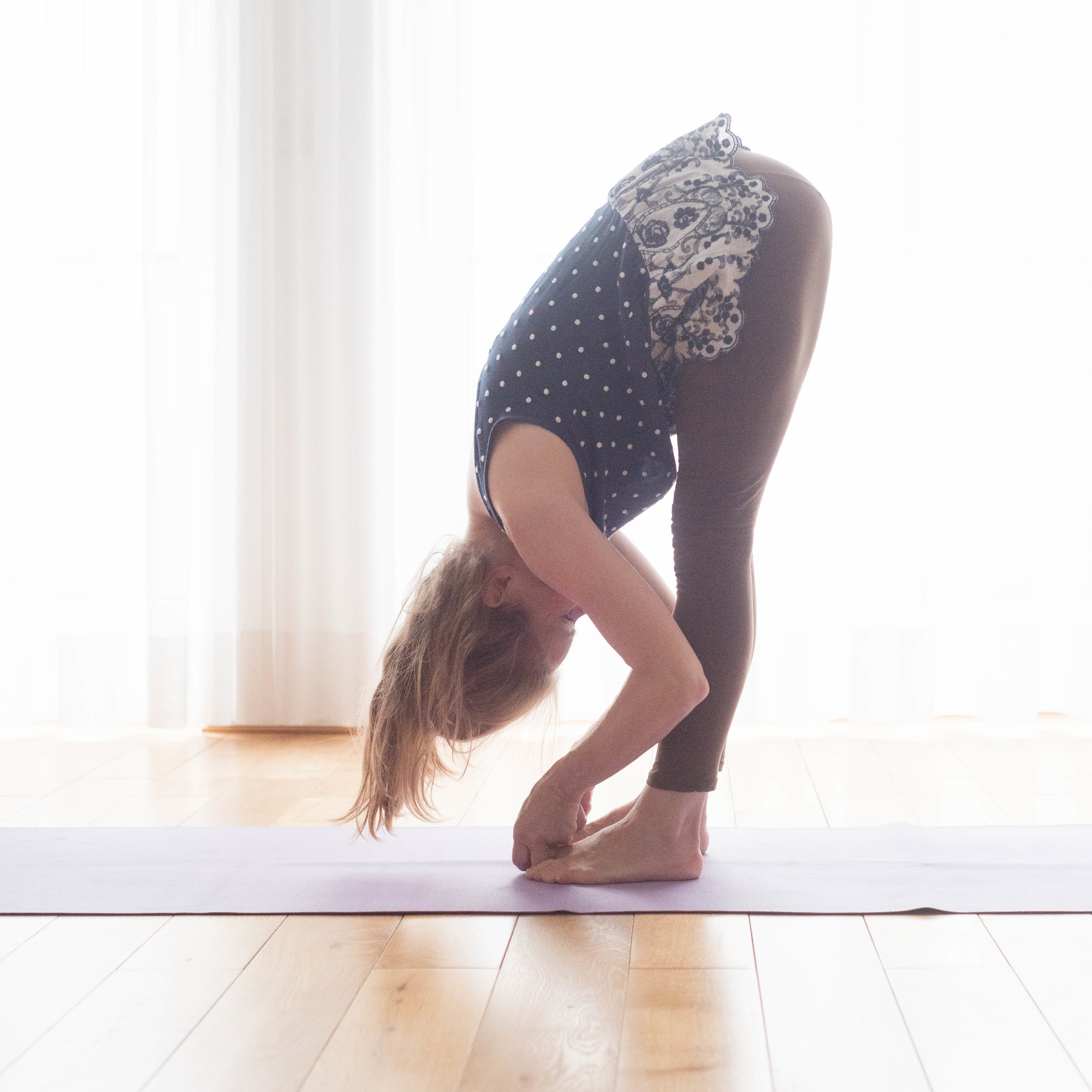 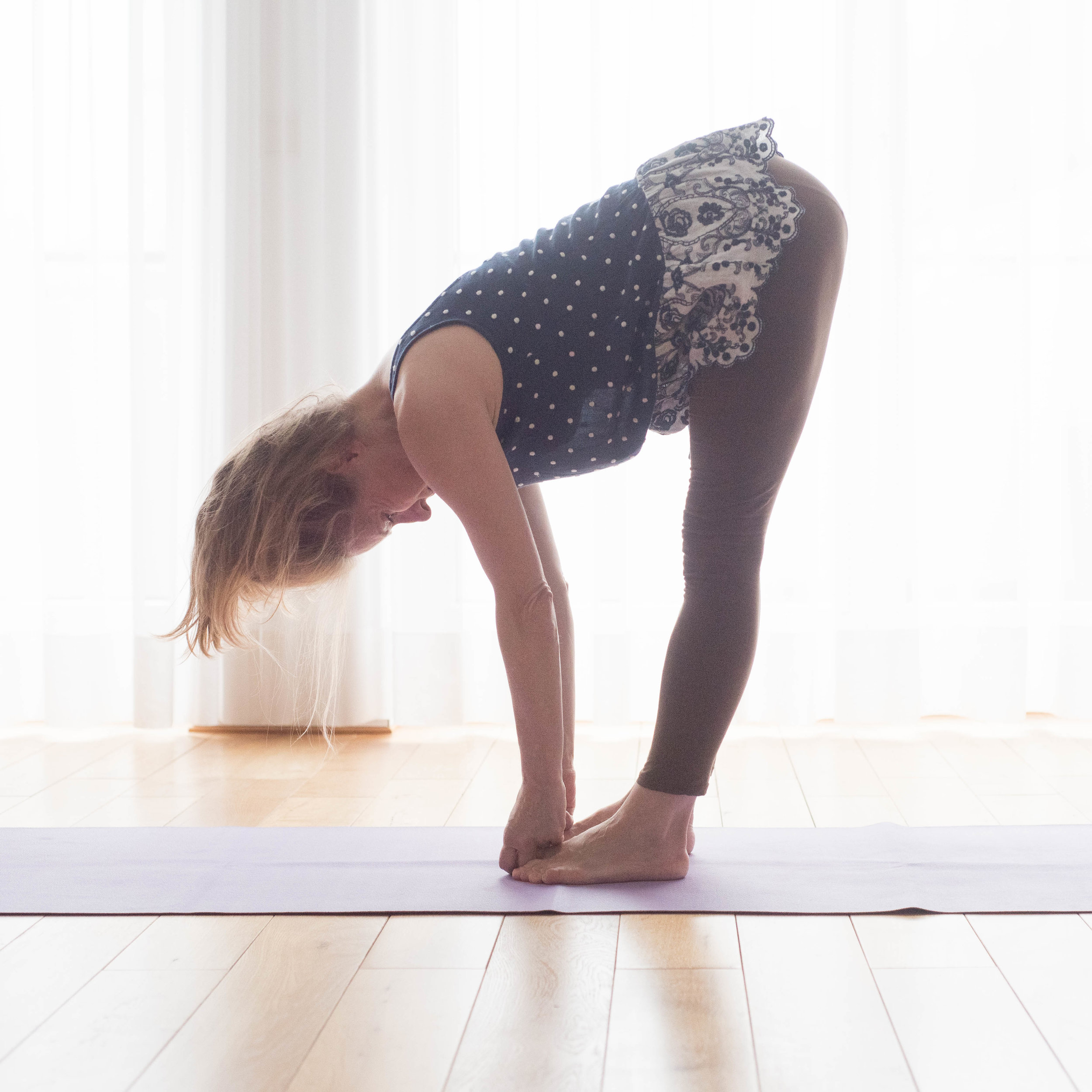 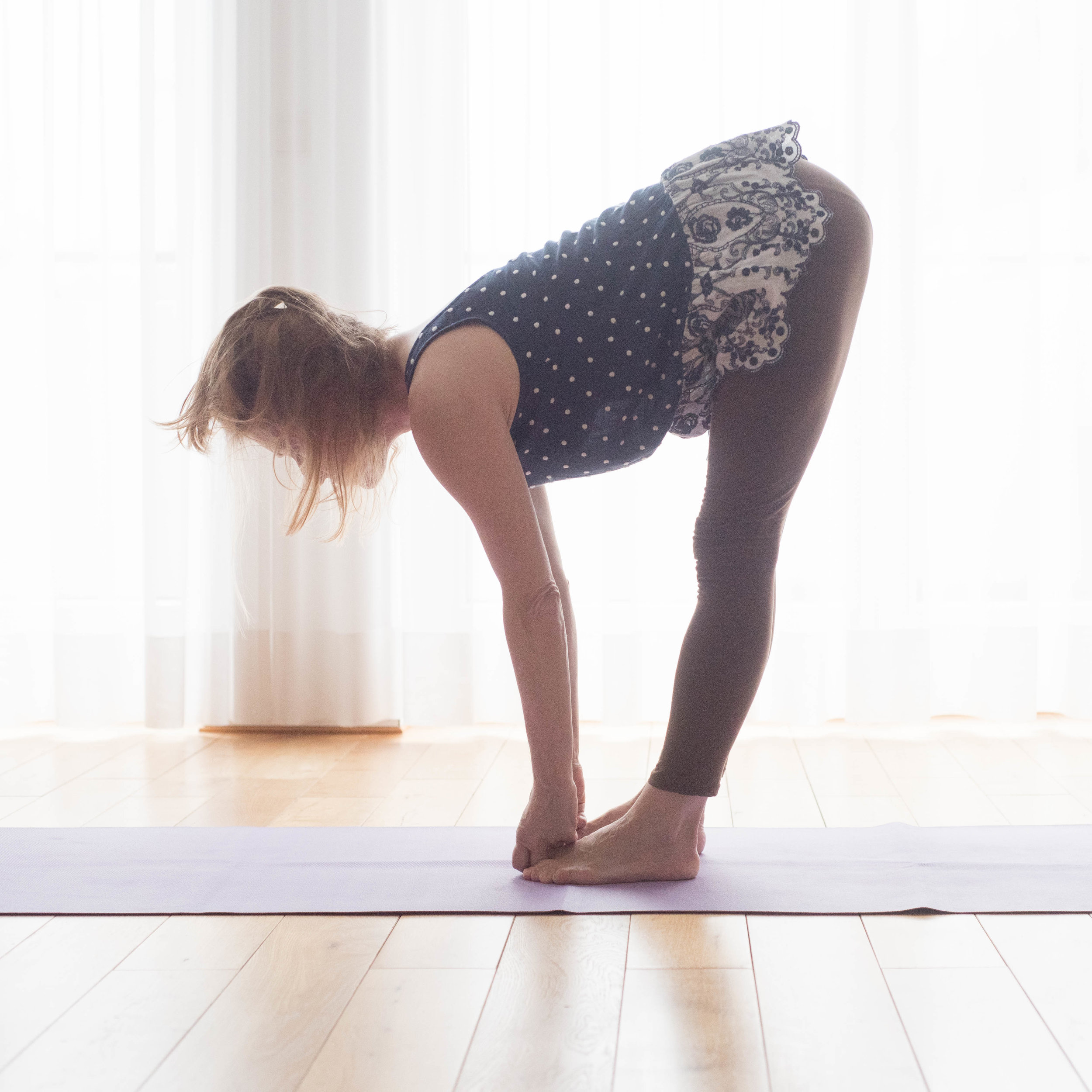 There are a lot of asanas that require to move the head backwards. Setu bandhasana is such an asana. Most back bending asanas imply that the head moves backwards. The neck is a very sensitive part of the body. Our necks are of different length. Some people can move their heads backwards easily, for others it’s difficult.

My question today: Is it always necessary to move the head backwards when coming out of an asana?

Pictures with Krischnamacharya show him in forward bending asanas with the head stretched backwards.

In the meantime I think this is not necessary. With this last movement of the head one creates often pressure in the neck without any reason. A forward bending asana works on other parts of the body, the neck doesn’t play an important role. My focus is the core and not the neck when I get out of an asana. 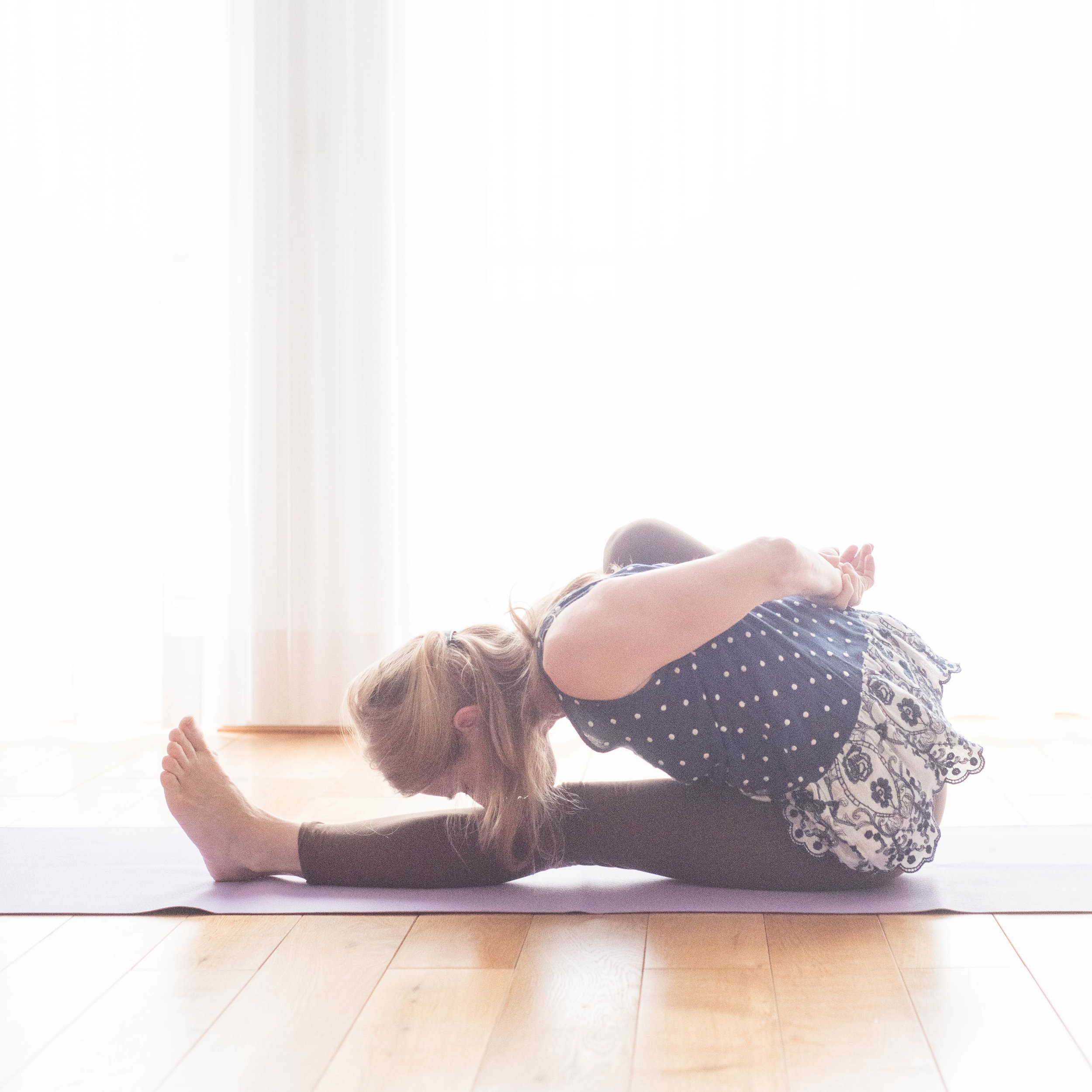 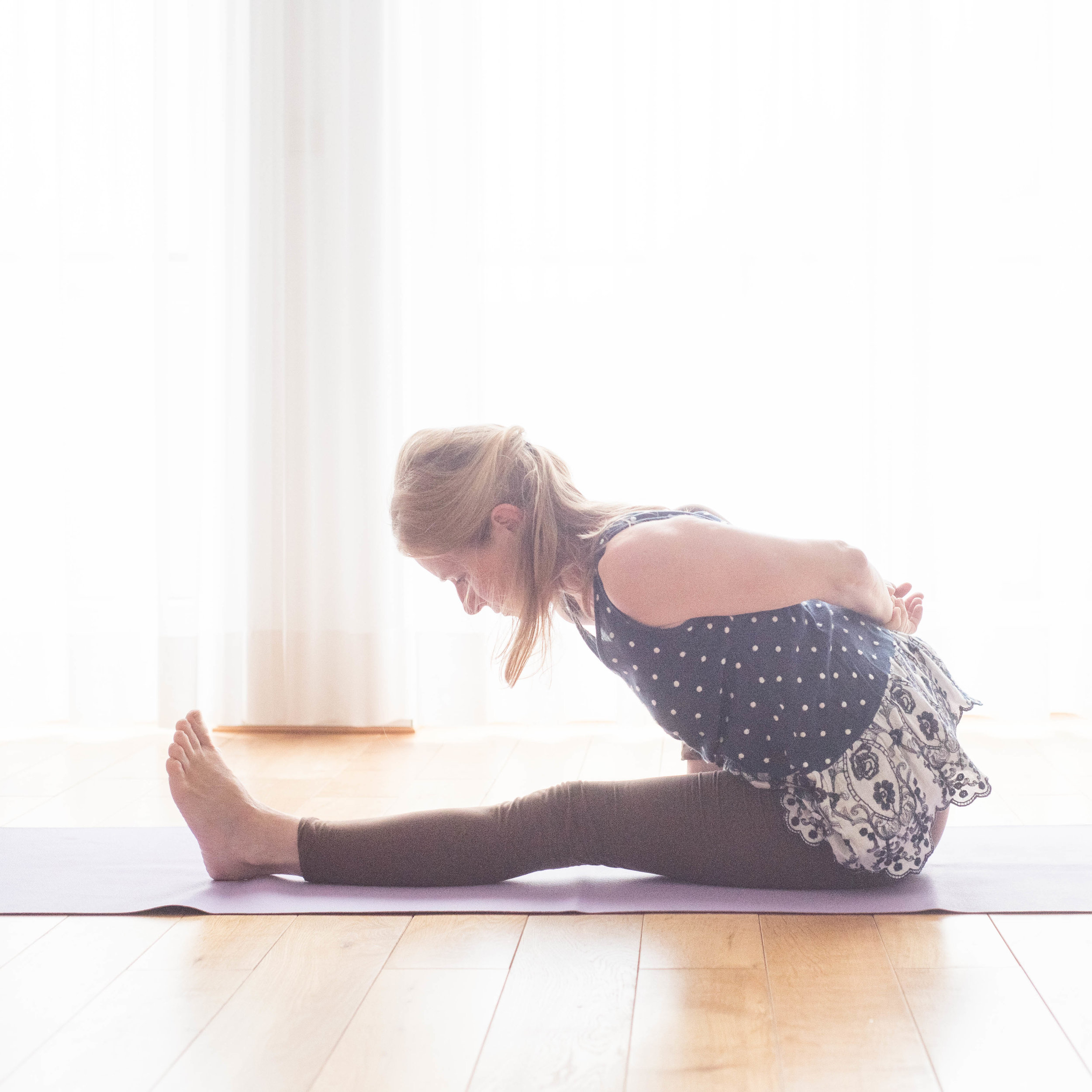 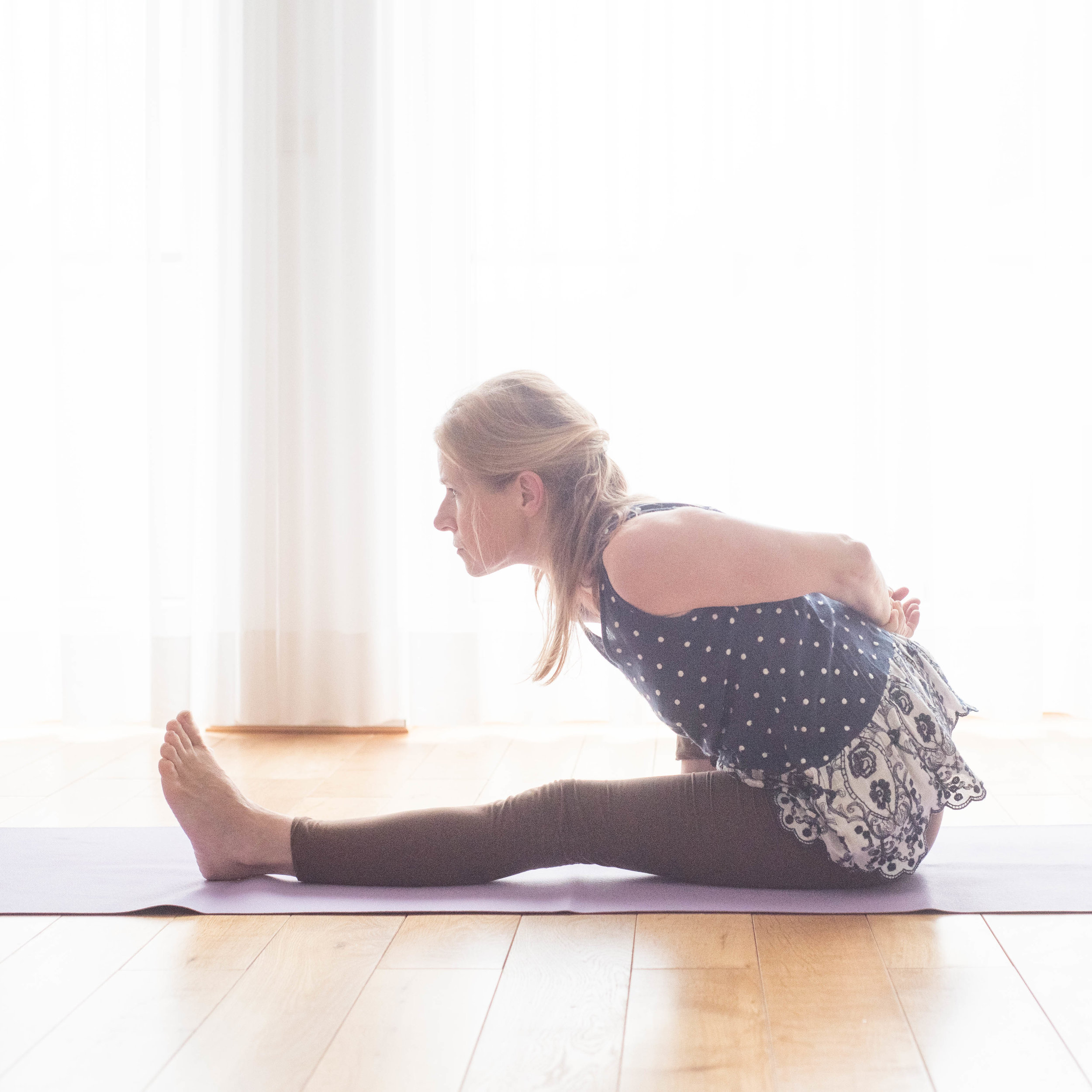 I think that we shall not do extra movements during a practice that make no sense. I try not to adjust my clothes or my hairdo when I practice. Throwing the head backwards is for me also such a redundant movement that makes no sense. It may look wild, but that’s it. To use the own energy wisely is it instead. I try to eliminate redundant movements, also the tiny ones.

When I practice primary Ashtanga yoga these days, I keep my head, neck and spine in line.

The next movement would require to move the head forward again. The next movement prepares the vinyasa. Legs get crossed close to the chest, the arms are next to the hips. The gaze is forward not upward. If one moves the head backwards when getting out of one of the forward bending asanas it’s an endless nodding with the head. 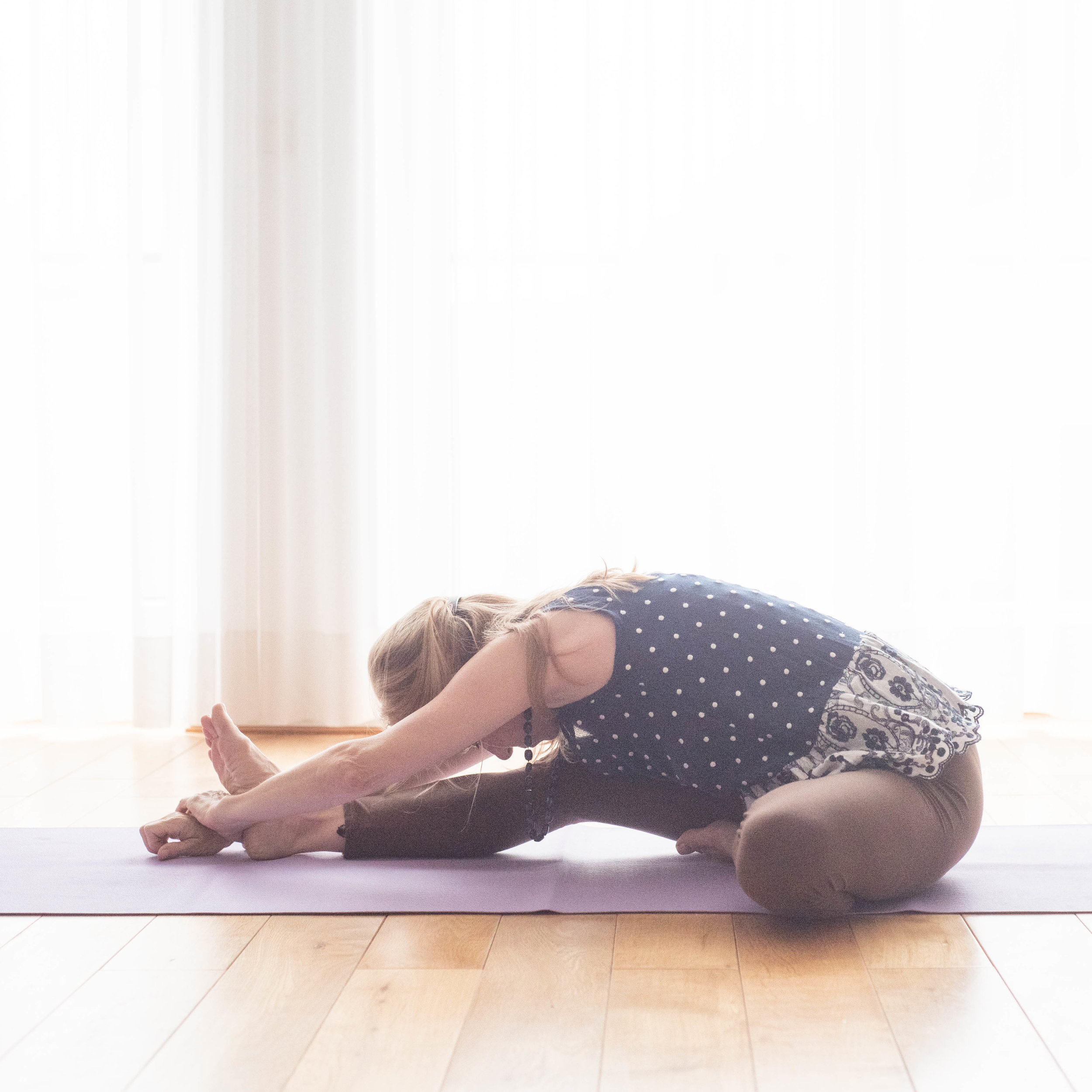 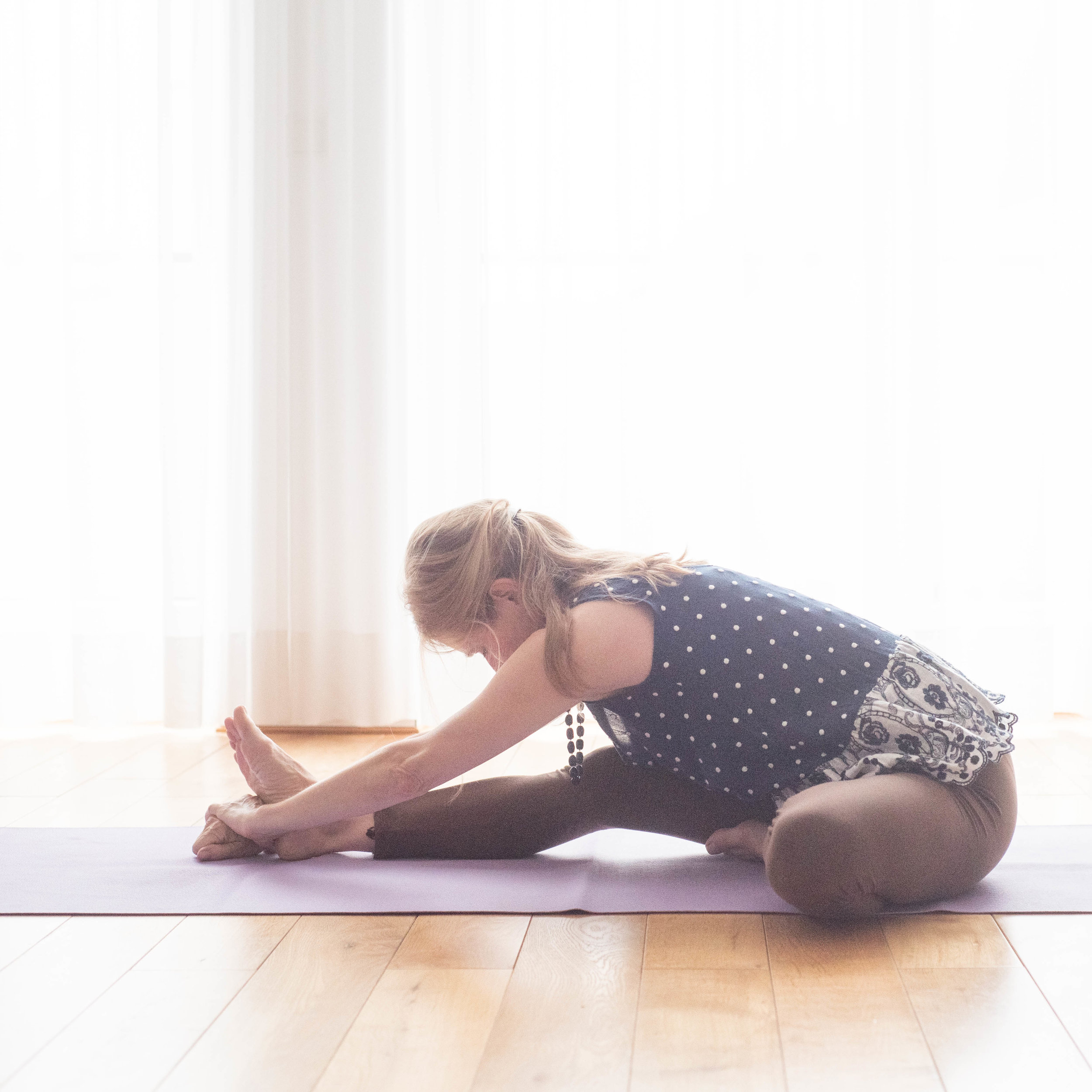 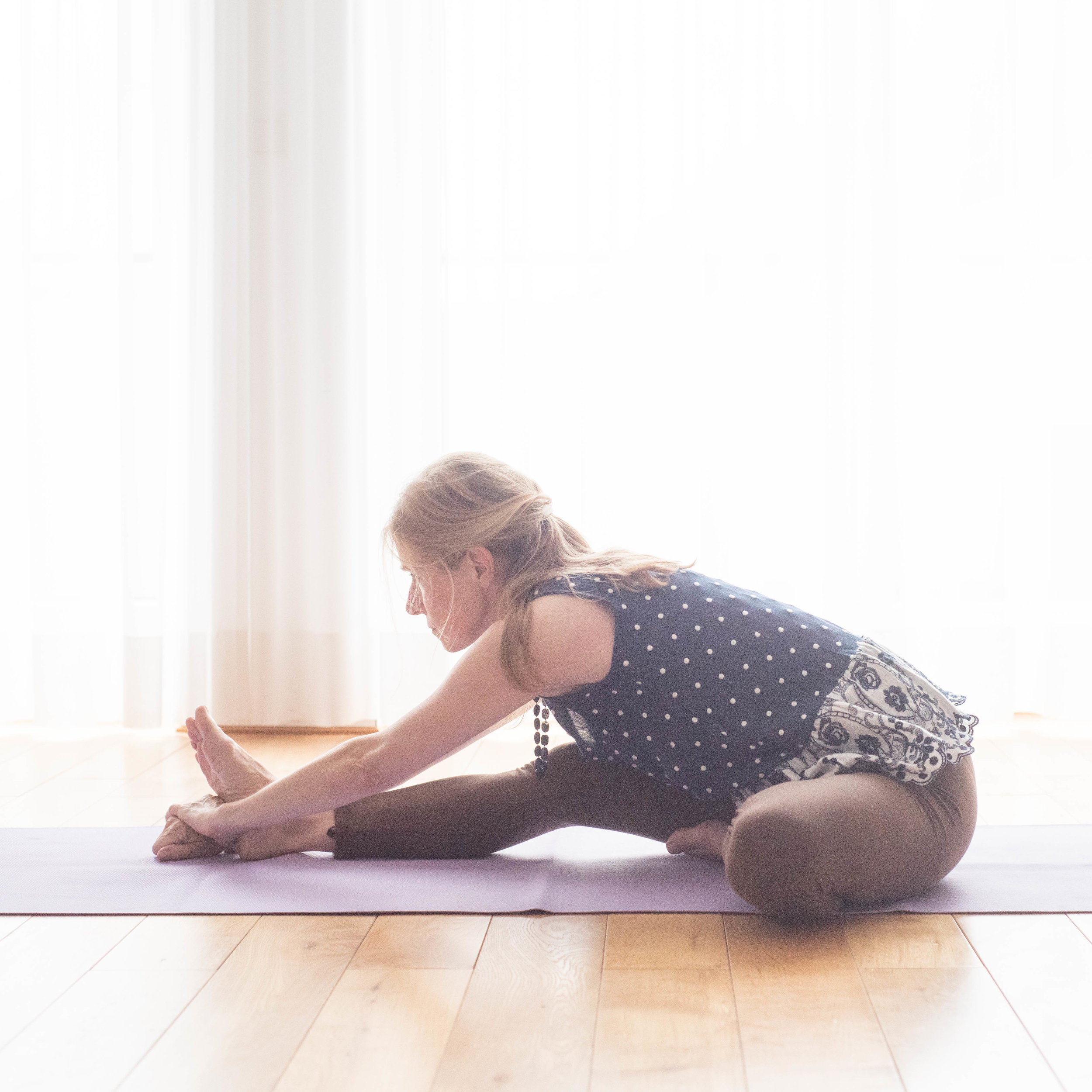 It might not be wrong, but I prefer to keep the neck in line with the spine these days. It also looks better.

I love traveling and I love practicing yoga. To travel and to practice yoga is often not possible. There are days of moving from one place to the other, that don’t allow to practice. Not every hotel room is as clean as I need it for a practice. Thick carpets don’t invite me either.

Sometimes I’m able t ignore all the obstacles and roll out my mat and practice. To be realistic, often I don’t practice when I’m on the road. I returned home a few weeks a ago, a bit weaker and a bit stiffer, but full of motivation and a lot of stories.

Important for me is that I don’t give up this practice, I return to it again and again. I feared the first practice after this rather long vacation. It was surprisingly good. I sweated, I bent and breathed deeply. I tried not to be too ambitious. Let’s see how the body feels tomorrow. I didn’t like to overstretch.

This rock in Utah, USA motivated me to bend backwards. It will remain a memory of a gorgeous time with my beloved one.

This blog is about my yoga journey. It has started decades ago and no end is in sight. My yoga practice became the lynchpin in my life. It even became a life travel guide. Namaste.